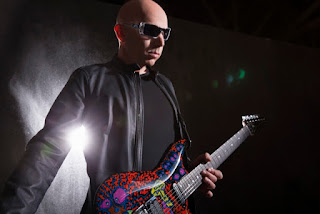 Los Angeles, CA – November 19, 2015 Following his successful European tour, JOE SATRIANI is looking ahead to the North American “Surfing to Shockwave” 2016 tour. This much-anticipated tour launches February 25th in Seattle continuing through April 24th in Vancouver, BC, with a new date announced in the Philadelphia Area (see below for the full tour itinerary). The 45-date tour will celebrate SATRIANI’s 30-year career including music from his first solo album, Not of this Earth through his latest release, his 15th solo album, Shockwave Supernova.

The tour promises to be a highlight for any long time SATRIANI fan. Of course, the set list will contain fan favorites, but the legendary guitarist also promises to include some gems, pulled from the ‘Satriani Songbook’ which may not have ever been performed live, or in some cases, for a very long time. Songs such as: “Big Bad Moon,” “Friends”, “Crystal Planet”, “Not Of This Earth”, “Luminous Flesh Giants” and “If I Could Fly” have been confirmed as part of the set list.

The European tour was a critical success with Graffiti.Punctuated praising the Hammersmith Apollo Theatre show, saying, "Joe Satriani is a magician…he’s the real deal, performing seemingly impossible feats right before your eyes. No smoke. No mirrors. Just magic." While theBirmingham Mail declared, “Guitarist Joe Satriani performed a mesmerizing and thrilling set” and Classic Rock Magazine said of the Cardiff stop, “…the new material from Shockwave Supernova hits home – the soaring On Peregrine Wings, the fun Crazy Joe … and sweetly lyrical Butterfly And Zebra, but as ever it’s the old staples that elicit the most love – Always With Me Always With You … the sole vocal piece, Blue Dream’s Big Bad Moon … and must-have Surfing With The Alien has us all up on our feet at the close.”

Last week, Joe attended the 11th Annual Classic Rock Roll of Honour Award ceremony in London where Joe took home the award for “The Maestro” and was honored to present Brian May of Queen with the “Living Legends” award as well!

April 24 Venue to be announced Vancouver, BC