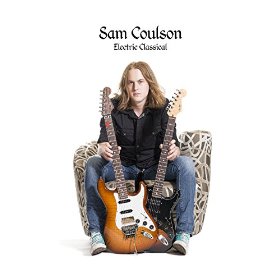 Says Sam, “I'm very proud of my first solo Album 'Electric Classical'. It's 10 of my favourite classical pieces played on a couple of Fender Stratocasters. I really enjoyed recording these tracks. I hope you enjoy listening to them!”

Sam Coulson made his debut on YouTube in 2007, sharing videos of himself playing songs on the electric guitar. His playing attracted the attention of guitarist Paul Gilbert, who invited him to be a guest instructor for the Great Guitar Escape he created in July 2012. This would eventually lead to Coulson joining the British rock band Asia. When Asia's guitarist Steve Howe departed from the band in January 2013 in order to pursue other projects, Coulson was selected as his replacement. Coulson has, so far, worked with Asia on their latest studio album, “Gravitas”, released in 2014