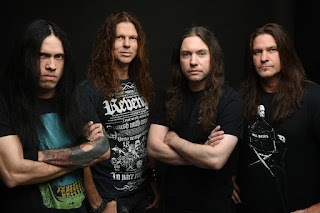 Heavy metal outfit ACT OF DEFIANCE will close out 2015 supporting Killswitch Engage on a handful of holiday shows at the end of December. This will wrap up what has been a landmark year for the band; which saw them release their debut album, Birth And The Burial. The record has been celebrated by fans and critics alike as an essential release for thrash and heavy metal fateful, and saw them on a headlining tour this Fall supporting the album. Dates for the Killswitch Engage shows can be found below, as well as the music video for their single, "Throwback"

In a time of endless sub-genre classifications being thrown at bands, Act Of Defiance cut to the quick, offering 100% in-your-face, uncompromising metal. "If you invited fans of all kinds of metal - from thrash to Scandinavian metal to modern American metal - and had them all in a mosh pit, Act Of Defiance would be their soundtrack," asserts guitarist Chris Broderick. With a hefty resumé that chronicles time spent riffing and shredding in Jag Panzer, Nevermore, and a seven-year stint in Megadeth, his pedigree speaks for itself. Furthermore, joined by powerhouse drummer - and fellow Megadeth alumnus - Shawn Drover, bassist Matt Bachand (Shadows Fall/Times Of Grace) and vocalist Henry Derek (Scar The Martyr) the band are a truly formidable metallic behemoth, and their debut album, Birth And The Burial, is ten tracks of armor-plated, state of the art heaviness. 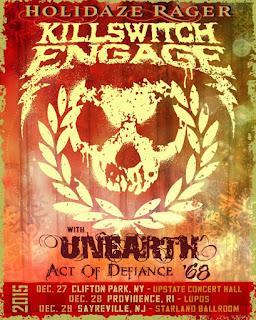