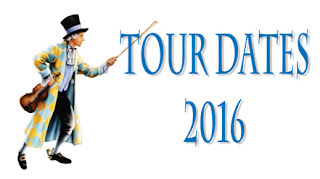 So, here we are the end of 2015, not one of Pendragon's busiest years but that doesn't mean bad. If fact in many ways it's good, it's given me time to reflect and get inspiration for writing new material for a new album, which is well under way. I've probably got about 4 or 5 great musical ideas so far which I'm pleased with, some song titles and an album working title [still a secret at the moment!]. The direction of the next album seems to be going in a very atmospheric way and as usual there's a lot of emphasis on the actual song writing and melodies.

I always felt it was a good idea to sometimes get out of people's faces for a while and just go and live life for a bit, which in turn keeps my passion burning for making music and playing live. I won the King Of The Surf Camp in Sri Lanka on our recent trip with Surf South West which I was well chuffed about. Over the last year I've seen loads of dolphins whilst out in the water in North Devon, some only 10-15 ft away from me and a huge turtle in Sri Lanka, these things inspire, and hopefully reflect in the music to keep it all real and positive. [duhh..what a hippy eh?]

Highlight for me in 2015 was playing Loreley and Ramblin' Man with Vincent in the drum seat, I predict great things with V-man in the band, there was one of the best vibes EVER in the band whilst doing these shows. At Loreley it was great to catch up again with Andy Latimer from Camel, who were on fire, as were the Steve Rothery band, Fish and Steve Hackett. Maybe the best Loreley yet?
Ramblin Man was also fantastic........we were so lucky it didn't rain on the day we played [it pissed down on the Friday and Sunday]. The audience reaction was amazing and I think we converted quite a few people towards the ways of the dragon!

We're also getting to think set lists, backing singers etc for the Masquerade Overture 20th Anniversary. Tiggy can only make a few of the shows [Paris, Russelheim + Boerderij] and Emma is busy with family life now, so we've drafted in Tina from Magenta and Verity from Clive's Alchemy project to fill in which is very exciting. We start rehearsing in the new year, I can't wait to get back in the rehearsal room with Peter and Clive and of course Vincent and the girls now...not to mention our trusty road crew who are a truly great bunch!

So , hope you all have a great Christmas and we look forward to seeing you on tour in 2016! Happy days...