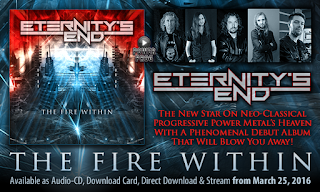 POWER PROG is very proud to announce the signing of the brand new international Progressive Power Metal blast ETERNITY'S END. The first common goal of this cooperation is the worldwide release of their debut longplayer "The Fire Within" at March 25, 2016 as Audio-CD, download card, as digital download and as stream via all major platforms.

ETERNITY'S END is the realization of a vision that Christian Muenzner, well known in his capacity as guitarist extraordinaire, solo artist, special guest on many albums and as member of bands like Alkaloid, Necrophagist, Obscura and Paradox, had since many years of forming his very own band in order to return to the style of music that was his first love and, to this day, is his biggest passion ... Aggressive, neoclassical power metal with a progressive twist and with a powerful and classic metal vocalist! And at end of 2013, he set out to make this vision into reality and started to write on matching song material.

With bass player Linus Klausenitzer (Obscura, Alkaloid) and drummer Hannes Grossmann (Alkaloid, Blotted Science, solo, ex Necrophagist, ex Obscura), the rhythm section was quickly found and with virtuoso Jimmy Pitts (The Fractured Dimension, Spastic Ink), a blessed with talent keyboardist has been obliged. After checking out several different singers, the right man for this sophisticated act of defiance was found at the beginning of 2015 in Ian Parry, who is best known for his stunning work with Elegy, Ayeron, Consortium Project and who also has released a couple of solo albums. A high-profile band was complete and ready to strike!

"The Fire Within" was recorded between January and April 2015, co-produced, mixed and mastered by award winning producer Per Nilsson (also known in the whole metal scene as guitar player and producer of Swedish melodic death metal institution Scar Symmetry), who gave the disc the finishing touch. So what you may expect? A majestic and heavy power metal album, filled to the brim with heavy riffs, neo-classical chord progressions, gifted vocals, big choirs, guitar and keyboard solos at their best, big orchestrations and epic melodies. In short: A new star will rise on neo-classical progressive power metal's heaven! With this debut album, ETERNITY'S END will for sure have a lasting influence on a musical genre.

You can find the latest info about the release here:
http://www.powerprog.net/releases_eternitys_end_the_fire_within.html


Or listen the title song "The Fire Within" here on Soundcloud ...
https://soundcloud.com/powerp…/eternitys-end-the-fire-within

Check out ETERNITY'S END on the web ...
Facebook: https://www.facebook.com/EternitysEndMusic