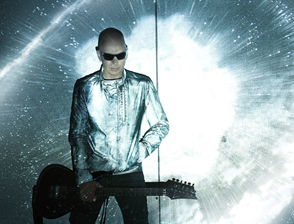 Los Angeles, CA – January 6, 2016 As the New Year kicks off, JOE SATRIANI is gearing up to launch his career retrospective “Surfing to Shockwave” Tour on February 25th in Seattle, WA. The 48-date tour will be celebrating “30 Years of Mind-Bending Guitar Daredevilry”; a phrase coined in a June 2014 career-defining retrospective feature in Rolling Stone. SATRIANI will spotlight music from his first solo album, “Not of this Earth” through his latest release and 15th solo album, Shockwave Supernova.

Also announced today, the exclusive “Surfing to Shockwave” Tour Contest! During the upcoming U.S. Tour, fans will have the opportunity to buy a raffle ticket at the show they attend (only those attending the show can purchase a ticket and it is one entry per person). The Grand Prize is a JS Surfing 20th Anniversary Guitar plus two roundtrip airline tickets to San Francisco, where they will meet Joe and get the guitar autographed. Additional prizes include; a signed Chrome Dome Joe Satriani 14-CD set and an autographed Shockwave Supernova vinyl album. The proceeds from this contest benefit Little Kids Rock, a nonprofit organization that provides new musical instruments and lessons for teachers to help expand music education in underserved public schools across the country.

Guitar World magazine recently held their annual “Readers Poll” for which fans chose SATRIANI as ‘Best Shredder‘ as well as presenting his 15th studio album, Shockwave Supernova with the “Best Shred Album of the Year”. Released this past August, Shockwave Supernovascored SATRIANI his highest chart debut at #19 on Billboard’s Top 200 Current Albums Chart. In addition, the album also debuted at # 3 on the Billboard Rock Chart and ranks as the highest charting all-instrumental rock album on Billboard’s Top 200 in the SoundScan era.

For two decades, the guitar virtuoso has traveled the world, playing to sold-out crowds as both a headliner and as founder of the all-star “G3” guitar extravaganza. SATRIANI’s studio and live recordings have sold more than 10 million copies worldwide to date and of his many solo albums, two have gone platinum and four others went gold, with 15 Grammy nominations between them. His side project,Chickenfoot, featuring former Van Halen front man Sammy Hagar, former bassist Michael Anthony, and Red Hot Chili Peppers’ drummer Chad Smith achieved certified gold status with their debut album and their second studio album debuted at #9.