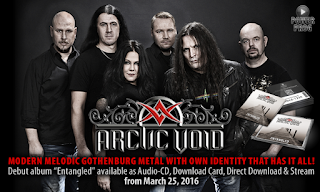 POWER PROG is proud to announce the signing of one of today's hottest newcomer when it comes to modern metal, the Swedes of ARCTIC VOID. The first common goal of this cooperation is the release of their stunning debut album "Entangled" at March 25, 2016 as CD, download card, digital download and as stream.

The history of Gothenburg's ARCTIC VOID has already started a few years ago, however under a different "working title". And already at this early stage and after the first better recordings, Per Stålfors, one of the founding members, entered into close contact with POWER PROG. Label CEO Götz Morgenschweis: "What i heard was really awesome. So I said to Per: Deliever me an entire album of this quality and we will be right there for you!".

Well, it took some time, especially to find the right bandmates to implement this all into practice. But now the wait is over and with a terrific line-up of gifted musicians, the time has come to let the whole thing go through the roof.

What makes this band so special? They come with two main singers (female/male), and especially this vocal duels are constantly a voltage! They combine the typical Gothenburg metal sound style with inimitable melodies and a catchiness that has no equal! And: They do not care about style drawers and delight us with a colorful mix of modern played unique metal. The crucial finishing touches were made through the mixing and mastering by none other than one of the top metal producers in Europe, Fredrik Nordström (At the Gates, Arch Enemy, Dark Tranquillity, In Flames, Soilwork, Opeth, Powerwolf ...) who gave the whole thing that special something!. And what else is there to say? ARCTIC VOID is armed and ready and a monster of an album is their most forceful weapon! 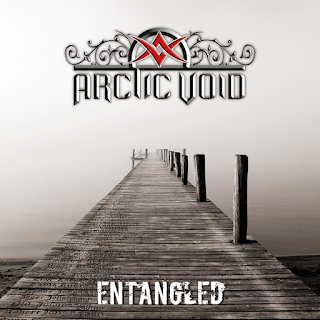 You can find the latest info about the release here:
http://www.powerprog.net/releases_arctic_void_entangled.html