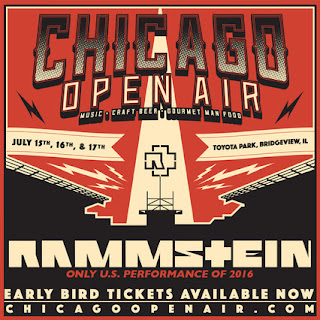 RAMMSTEIN ANNOUNCED AS ONE OF THE HEADLINING ACTS FOR CHICAGO OPEN AIR MUSIC, CRAFT BEER AND GOURMET MAN FOOD FESTIVAL JULY 15, 16 AND 17 AT TOYOTA PARK IN BRIDGEVIEW, IL

Chicago Open Air has announced Rammstein as one of the headlining acts for the 3-day music, craft beer and Gourmet Man Food festival held July 15, 16 and 17 at Toyota Park in Bridgeview, IL, just outside Chicago. This marks Rammstein’s only 2016 U.S. performance and first Chicago show since 2012. Additional festival headliners will be announced on February 16.

Chicago Open Air will feature performances by over 40 bands, an outdoor Gourmet Man Food selection incorporating local and regional cuisine, a craft beer village highlighting top brews from the region, and other entertainment and fan experiences.

Rammstein are known for their explosive and creative live performances with spectacular lighting. In the course of two decades, the German rock band have risen to the apex of the great rock pyramid, achieving album and DVD sales in the millions, headlining major festivals and bigger venues around the world (including New York’s Madison Square Garden, a show that sold out its 18,200 tickets in under 30 minutes!), and establishing themselves as peerless master showmen with an approach to their art – and ‘art’ is the word – that is dramatic, epic in scale and capable of touching all of the senses; a dark and spectacular fairy-tale laced with controversy and don’t-try-this-at-home theatrics.

"Rammstein is an act that is headlining major festivals all over the world,” says Chicago Open Air producerDanny Wimmer. “I’ve been trying to get Rammstein here for years and I couldn’t be more ecstatic to launchChicago Open Air with them. If you’ve never seen Rammstein LIVE before, you are in for a real treat."

Look for the full list of Chicago Open Air music, craft beer and artist-inspired beverages, as well as the Gourmet Man Food lineup to be revealed Tuesday, February 16 at 5:00 PM Central Time atwww.ChicagoOpenAir.com.

Ticket prices will increase in the coming weeks, so fans are encouraged to buy early and save.

Chicago Open Air is produced by Danny Wimmer Presents, Live Nation and Toyota Park, with the support of the Village of Bridgeview and Bridgeview Mayor Steven Landek.
Festival doors open at 11:00 AM each day and the show ends at 11:30 PM on Friday, 11:00 PM on Saturday, and 10:00 PM on Sunday.