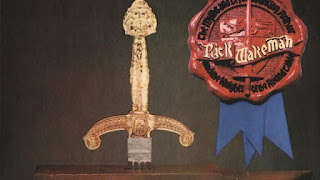 I have always had in mind re-recording and performing an extended version of King Arthur as it has only ever been performed three times in the UK. I am delighted to now have the opportunity to do this and especially so with the help of the fans and my campaign on PledgeMusic……and if all goes well, maybe one day put it back on ice! In the meantime, I’m Iooking forward to the première performance at the O2 in London on June 19th as part of the Stone Free Festival.”
Rick Wakeman

The new recordings will be free of the studio limitations and single disc duration of the original and the new record will be a double album as it was originally intended to be.
There will also be new artwork by Roger Dean and the album will be available on a 2 x CD format, limited edition 2 X 12" LP, and hi quality digital download, this new recording includes all the original music and also five new pieces of music all in the style of the original recording.

By ordering your copy of this new recording of The Myths & Legends Of King Arthur here on PledgeMusic, you’ll also gain access to recording updates, bonus content, video clips and much more.

You are invited to become part of the recording by pre-ordering any of the exclusive items and unique experiences listed below, including an invitation to visit the studio and see the album being recorded, attend a very special launch party, and loads of exclusive memorabilia only available here.