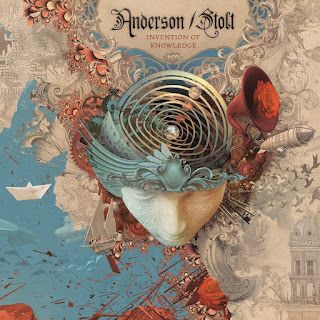 Jon Anderson had this to say: “.....Music is always the driving force in my life...working with such a wonderful musician as Roine Stolt made the creation of this album very unique,we are very excited with the release of 'Invention of Knowledge'.“

Roine Stolt adds: “It is not aiming at being new Yes music; just new music, modern and classical, rock and ethno, tribal and orchestrated, grooving and floating. Hopefully in the true spirit of “progressive” - leaning forward, surprising and also comforting with familiar run-arounds.

We’ve been “inventing” as we go along - Jon is an endless source of new ideas. We’ve been bouncing ideas back and forth for months and as a result there are probably dozens of versions of these songs. It’s been a very interesting and rewarding time and the result is just insanely detailed.”

Lalle Larsson
For fans of YES and The Flower Kings I can highly recommend this new album with YES singer Jon Anderson & guitarist Roine Stolt. Big compositions, the iconic voice, a lot of prog rock celebrities on one album. Oh my god, even yours truly have laid down some keyboard tracks for the album! To be released in June. Stay tuned for more news!
Yours truly,
Lalle