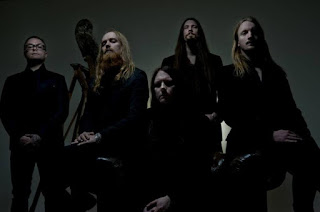 
SWEDEN - Katatonia, the Swedish purveyor of dark progressive rock/metal, has revealed details of its eagerly awaited 10th studio album, The Fall of Hearts, set for release on the May 20, 2016 through the band's long-time home of Peaceville Records.
The band commented: "This album is probably everything we unknowingly ever dreamed of to release. It's a bleak but adventurous journey through our elements, we haven't held back, we have pushed to get forward and backward in the ever spiraling night of our musical legacy."
The official follow-up to 2012's acclaimed Dead End Kings was recorded at Stockholm's Studio Gröndahl & Tri-lamb Studio, and was self-produced by Anders Nyström and Jonas Renkse. Mixing and mastering duties were carried out by Jens Bogren (Opeth, Ihsahn, Devin Townsend) at Fascination Street Studios, with Karl Daniel Lidén (Switchblade, The Ocean, Greenleaf) brought in as engineer.
The dramatic yet desolate artwork was created by long time Katatonia designer and illustrator Travis Smith.