Myrath: get a release date for their Legacy Album 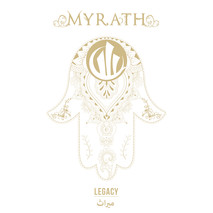 earMUSIC is proud to announce the cooperation with its French partner labelVeryCords for the release of the new studio album by the progressive metal band MYRATH.

‘Legacy’ is a interesting album, not only for the undisputable impeccable and inspired playing, for the freshness of the songwriting and for the powerful production but because it is one of the very few examples of metal music mixing oriental & cultural influences that rarely meet in the genre.

MYRATH (meaning "Legacy") are in fact coming from Tunisia, a wonderful country mostly known for its Mediterranean beauty but certainly not for its heavy rock.
In an historical moment where different cultures, different religions seem to be afraid of each other, once again music brings people together.
What a refreshing and mysterious experience it is, to enjoy a band who has clearly admired the works of masters of the genres as Dream Theater and Stratovarius, adding the unique oriental harmonic touch coming from their history.

Their wonderful new album will be available on earMUSIC as CD Jewel and digital on April 29th 2016.