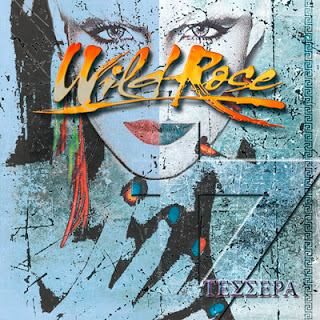 Wild Rose details:
Wild Rose has been rockin' for over a decade.
The original idea was sprung in 2004 by Andy Rock. A lot of soul-searching was required initially, as it was essential to find a suitable line up to harness the stylish and polished mellow sound of a quality A.O.R. band. Finally, after two years and several line up changes Wild Rose settled on the line up today, introduced to an unsuspecting public back in 2006, with quality songs composed by Andy Rock.

2007 Wild Rose released their first promo single CD entitled "It's All About Love" which contained the hard hitting title track and "Too Late", tracks that rapidly became accepted and loved by the A.O.R. audience. During the same period Wild Rose were picked up as support on Talisman's Farewell Tour in Hellas.

Wild Rose returned in mid 2009 and recorded a 10 track demo CD with tracks written by Andy Rock and Dirty Haris.

These songs matured through the rehearsal process and ended up in professionally recorded versions on the band’s debut album “Half Past Midnight” which was finally released on 10 October 2011 on the "Retrospect Records" label and received great results in the A.O.R. specialized press. The band also performed two successful live shows in Athens and Thessaloniki to support "Half Past Midnight" and also participated in "Rosewood Festival" and received a great response and applause from the Hellenic audience.

December 2011 and "Half Past Midnight" hits the Best Debut Release / Newcomer of 2011 on Heavy Paradise.

March 2012 and Wild Rose performed at "Rosewood Festival II" along with bands like Newman, Work Of Art, Konkurent to name a few, taking rave reviews from the music press.

Later on 2012, the band has worked on new songs and recorded their second album “Dangerous” which was released on 22 February 2013 on the "AOR Heaven" label.

Wild Rose “Dangerous” receives rave reviews worldwide from the press and in June 2013 hits No.1 on import sales in Japan (BURRN Magazine).

August 2013 and Wild Rose debut album Half Past Midnight hits SOLD OUT of it's press at "Retrospect Records" label.

"CEO Retrospect Records / Sam McCaslin: I'm very happy to announce that the Wild Rose 'Half Past Midnight ' CD is Officially Sold Out. Congratulations guys for being one of the Top Sellers ever in Retrospect's vast catalog. Great band , great music. Much respect to Andy Rock and crew for a job well done!"

March 2014 and Wild Rose sign with "AOR Blvd Records" and are celebrating their Ten Years Of Existence with the release of their third album "Hit 'N' Run" along with a tour to support it.

March 2015 Wild Rose sign a deal with "Nevermore Production Films LLC" for the track "Too Late" taken from their debut album "Half Past Midnight" to take part as a soundtrack on the upcoming movie "The Barn".

April 2015 George and John Bitzios reunite with the band and Wild Rose release the acoustic version of the track “I Want Your Love” as a single.

In the meanwhile Wild Rose start writing and recording new songs for their upcoming fourth album and also complete their “Hit ‘N’ Run Tour” in October with more than 5 successful shows in Hellas taking the applause of the crowds.

November 2015 and Wild Rose sign with "Lions Pride Music" for it's worldwide release in May 2016; with "Avalon / Marquee Inc." for it's Japanese release and also with "Steel Gallery Records" for an exclusive Hellenic Press release.

“4” was mixed by Pelle Saether at Studio Underground, Vasteras, Sweden and mastered by Dan Backman and Produced by Andy Rock and co-Produced by Wild Rose.

December 2015 and the new album was ready and three different front covers were taken care by C.S.M&P Designs for the triple release of it.

"Wild Rose – 4" was critically acclaimed by the press:
"Like a glorious page ripped from the book of ‘Consummate 80s American Melodic Rock’, Wild Rose’s fourth release is a monumental achievement that will have fans of Survivor and Night Ranger begging for more. Simply amazing! – Bruce Mee/Fireworks Magazine UK"

"A major step up for Wild Rose in every aspect. Much bigger production, terrific performances and above all else - some truly catchy old school AOR songs that will help these guys gain a lot of new fans. – Andrew McNeice/MelodicRock.com"

And the Wild Rose story keeps on rocking'...

Tarja Turunen: announces the release of her new heavy rock album “The Shadow Self”.