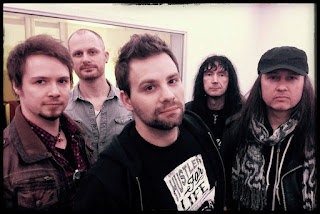 We are delighted to welcome Finnish keyboard player Christian Pulkkinen to the line up.


Christian, who will be known as 'Chrism', may be familar to some of you as he has also played with Finnish Progressive Metal bands Simulacrum,
Adamantra and Epicrenel.

He has already recorded the majority of his keyboard parts on for the new album, which is set for release via AFM Records in Autumn of this year.

Bassist Paul Logue comments “Christian has been an excellent addition to the ranks. The fans can expect huge overblown keyboards with lush strings, tasteful piano and the lead interplay with Thorsten Koehne is exceptional”.

The band wishes to thank Steve Williams for his contribution over the last three years in Eden’s Curse. Steve has been a fantastic band mate and leaves the group on excellent terms. We wish him nothing but the greatest of success as he returns to his first love with the reformed Power Quest.

In case you missed it, Christian's announcement was made during a Live Facebook broadcast on our Official Facebook Page and can be seen here: