The Jelly Jam: will release their epic new album Profit in May 2016 via Music Theories Recordings. 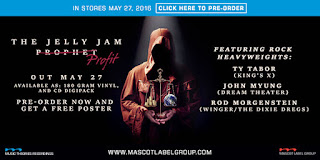 The Jelly Jam will release their epic new album Profit on 27th May 2016 via Music Theories Recordings.  http://www.mascotlabelgroup.com/the-jelly-jam

Profit is a glorious and affecting cinematic experience, full of suspense; the record follows the heroic yet daunting journey of The Prophet who, inspired by a deep sense of responsibility, embarks on a mission to try and save the world, and to open the eyes of Those Who Will Not See.

The Jelly Jam will support their latest album with full tour dates to be announced HERE. As guitarist Ty Tabor explains, "This album is without a doubt the most special moment the band has ever had together, and we must make touring real this year to support it."

Profit is now available to pre-order from the MLG store. The 180 grams vinyl is limited to 2000 copies, and comes with a download card.  http://www.mascotlabelgroup.com/the-jelly-jam
The Jelly Jam