Eden's Curse: return to the UK for a full headline tour in support of their fifth studio album 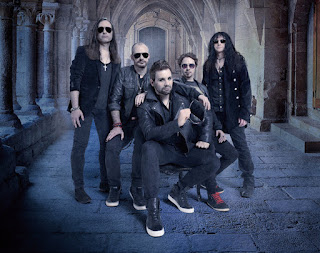 Eden's Curse return to the UK for a full headline tour in support of their fifth studio album, set to be released by AFM Records in late Autumn.

The dates are as follows:


Special guests on the tour are Sheffield's C.O.P. UK, whose vast touring experience with the likes of Saxon and Helloween has begun to pay off in earnest. They signed to German giants UDR Records, home of Motörhead, Saxon, Alice Cooper & Europe, who released their latest album 'No Place For Heaven'.

Evolve will be a new name to most - for now! This quintet from Montreux, Switzerland, came to prominence last year when they won acclaimed Rock & Metal producer Dennis Ward's (Unisonic, Krokus, Angra, Eden's Curse) song writing competition. Paul Logue of Eden's Curse happened to be on the judging panel and championed the band's cause. It therefore seems fitting that Paul should extend an invitation to the talented Prog Metal outfit to come tread the UK's hallowed boards with Eden's Curse in November. They are hotly tipped to impress!