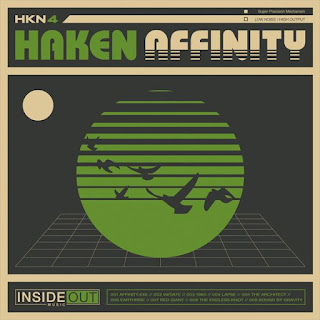 HAKEN’s 2013 album “The Mountain” was a tremendous success and perfectly combined a refreshing, modern approach with traditional ingredients. Referring to such diverse influences as Gentle Giant, Porcupine Tree, Dream Theater, Yes or King Crimson and forming concise arrangements via their own inventiveness, makes HAKEN such an astounding act. “Affinity” is another confident affirmation of that, yet taking a trip through the 80’s as guitarist Charlie Griffith explains: “For me, it means albums like “90125” from Yes, “Toto IV” and Crimson’s “Three of a Perfect Pair” and even Vince DiCola’s score from “Transformers The Movie”. We all love the sounds they used; the keyboard and drum sounds gave the music a cool flavour and we've incorporated some of that approach throughout “Affinity”, but especially on the track “1985”. Of course there’s still a modern edge to the drums and heavy guitar tones on what you'll hear.” Another notable highlight is the 15 minutes long “The Architect” featuring guest vocals from Einar / Leprous, which underlines the band’s wish to evolve as Griffith confirms: “The last thing we want to do was to repeat what we’ve done before. Just because “The Mountain” has been our most successful release to date, we didn’t want to just copy the formula. I'm sure we have found the right way to move forward, while keeping enough of the HAKEN style to satisfy our fans.” The mediabook includes a second disc containing the entire album as instrumental version.