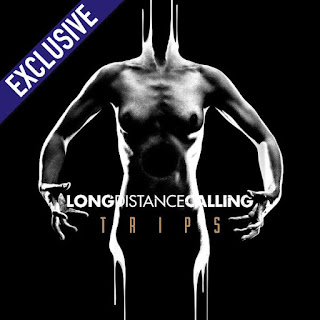 “One of the great things about music is that it has the capability of time travel.” - M. Ward. Music is time travel. And LONG DISTANCE CALLING are one of its frequent flyers, pioneers in shattering boundaries and building sonic bridges. Where other bands have tried to live up to wannabe-avantgarde terms like retrofuturistic or post-whatever, LONG DISTANCE CALLING lived in their own bubble from the very beginning. Still, even the biggest bubble is eventually too small – and in 2016, it bursts in a radiating explosion of creativity, progress and a courageous re-defining of old virtues. What in recent years could (with just a little bit of artistic freedom) be described as post rock has culminated in this liberating move called “TRIPS”, shutting drawers, shattering expectations and liberating them from constraints. “This record is our most daring and varied album yet”, the band states. “And also our most accessible.” From the highly atmospheric opener “Getaway” (think “Escape From L.A.” scored by a modern day Pink Floyd) across the driving and intense anthem “Reconnect” with its chorus built for eternity. The emotional impact of “Rewind” with its duelling piano and beats, to the vast plains of the echoing monster of an instrumental, “Momentum”, before the album erupts into the 13 minute climax “Flux” with its spiritual and epic sense of psychedelic grandeur, making “TRIPS” a bold release worth its ambiguous title. “TRIPS” is an odyssey of eclectic, demanding and yet highly rewarding proportions that should unite connoisseurs of prog, metal heads, rockers and alternative fans alike. Or should we just call them lovers of music? / Incl. etching on side D, comes on 180 gram vinyl.