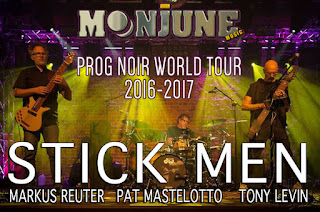 
​Stick Men's Prog Noir Tour Chapter One is over, it was a very successful 30-dates tour of one of the world's premier progressive rock bands. This year, Stick Men will do a 2 weeks tour in Europe this Fall, to be squeezed in between two large segments of King Crimson's Fall tours, while this Summer the band's chief Tony Levin will be busy touring with Peter Gabriel and Sting. In 2017 the seminal progressive rock trio, featuring three formidable musicians: Tony Levin, Pat Mastelotto and Markus Reuter will tour the West Coast USA followed by the participation at the North American biggest progressive rock festival, The Cruise To The Edge, and a short tour of Japan.

The long awaited new studio album "Prog Noir" will be out this Fall and there will be a special announcement about the album. In meantime, there is a double live album STICK MEN + "Midori" with very special guest DAVID CROSS (of the King Crimson mid 70's fame), recorded live in Tokyo on April 10, 2015 - still available via MoonJune's mail-order. 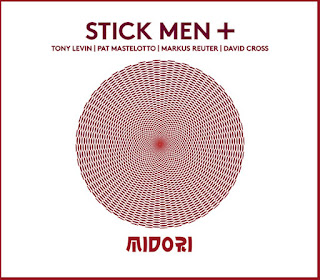