Eden's Curse: delighted to announce the participation of Liv Kristine on new album!! 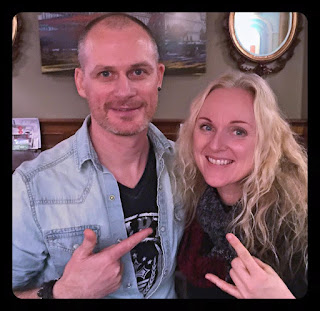 Eden's Curse are delighted to announce the participation of Liv Kristine (ex- Leaves' Eyes, Theater Of Tragedy) on their forthcoming new studio album.

It seems their collaboration was 'meant to be', as bassist Paul Logue explains: "In a meeting with our label, AFM Records we discussed the possibility of them reaching out to Liv to enquire if she would be willing to guest on a track on our album. They agreed and it was left at that. Fast forward three days later and I'm attending a party for a friend, at a pub in Glasgow, and who walks in the door - Liv! Initially, I didn't "twig" that it was her, until her Tour Manager, whom I knew, walked in a few minutes later wearing a Leaves' Eyes shirt. We shared a quick hello and he told me that Leave's Eyes were playing in the venue next door and then the penny dropped. I shared the back story of my label discussions and he made the introduction. Liv and I had a wonderful chat and we agreed to hook up via email to see if she liked the song and take it from there - thankfully she did and the rest is history. It must have been fate!".

Norwegian born Liv, a pioneer of the "beauty and beast" vocal approach adopted by so many of today's acts, has been at the forefront of the Symphonic Metal scene for well over a decade. Her trademark vocals have become synonymous with the genre through fronting one it's most iconic acts, to her own successful solo career. Yet, her collaboration with Eden's Curse, on the track 'Unconditional', will see her adopt a slightly different vocal approach.

"It's not a ballad, per se, as it rocks out in places, but it's a song very much in the same vein as 'Unbreakable' with it's pop sensibilities, style and melodies. It could arguably be the most commercial sounding track we've ever written! The contrast between Liv and Nikola's voices works so well and adds a real personal touch to what is essentially a love song. I normally don't DO love songs, but sometimes you cannot help be influenced by the special people that surround your life - whether it's your spouse, partner, friend, family or even children - your love for them is unconditional" remarks Paul.

Liv adds: "It was such a pleasure and honor working with Eden's Curse on 'Unconditional'. I love this track - it's like the freshness of a sunny, really early Saturday morning. It's powerful, highly interesting and passionate. Nikola's voice is outstanding and gripping - a superb duet partner! I met Paul during one of my tours last year and we had such a pleasant talk. I hope we get the chance to perform 'Unconditional' live some day".

"Hear, hear! It would be an absolute pleasure to share the stage with Liv and perform this live" says Paul. "Liv was a real joy to work with. She's a truly kind soul who embraced our song from the very outset and delivered a real classy performance with her instantly recognisable vocals" he adds.

'Unconditional' will appear on the forthcoming new studio album by Eden's Curse, which is set for release on AFM Records this coming Autumn. More details to follow soon. 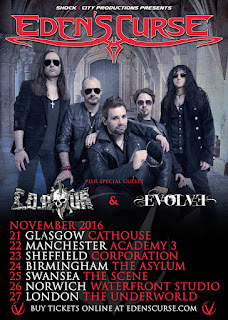 Eden's Curse return to the UK for a full headline tour in support of their fifth studio album, set to be released by AFM Records in late Autumn.

The dates are as follows: Tickets http://www.edenscurse.com/

Special guests on the tour are Sheffield's C.O.P. UK, whose vast touring experience with the likes of Saxon and Helloween has begun to pay off in earnest. They signed to German giants UDR Records, home of Motörhead, Saxon, Alice Cooper & Europe, who released their latest album 'No Place For Heaven'.

Evolve will be a new name to most - for now! This quintet from Montreux, Switzerland, came to prominence last year when they won acclaimed Rock & Metal producer Dennis Ward's (Unisonic, Krokus, Angra, Eden's Curse) song writing competition. Paul Logue of Eden's Curse happened to be on the judging panel and championed the band's cause. It therefore seems fitting that Paul should extend an invitation to the talented Prog Metal outfit to come tread the UK's hallowed boards with Eden's Curse in November. They are hotly tipped to impress!