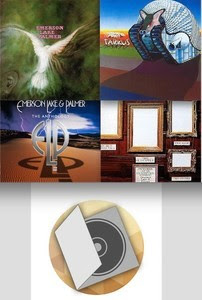 ELP Re-issues Pt. 1 http://www.pledgemusic.com/projects/elpreissues
Pre-order "Emerson, Lake & Palmer","Tarkus" & Pictures At An Exhibition on 140g Vinyl & double CD plus the 3CD Anthology
Vinyl
Considered by many to be one of rock’s original first super-groups, Emerson, Lake & Palmer helped to broaden the audience for the genre from hundreds of thousands into tens of millions. ELP formed in England in 1970 consisting of Keith Emerson (keyboards), Greg Lake (bass guitar, vocals, guitar) and Carl Palmer (drums, percussion). The band created a brand new world of music, combining classical and symphonic rock fused with beautiful vocals.

Pre-order the re-issues of “Emerson, Lake & Palmer”, “Tarkus” and “Pictures at an Exhibition” and you can also get strictly limited collectable Test Pressings.

The LP’s have been newly cut from 24BIT/96 KHZ files with replications of the original sleeves, and are on 140 gram Vinyl for superior sound quality. The LPs include an explanatory note from Greg Lake on the use of 140 gram vinyl. The ‘Pictures At An Exhibition’ LP is a new 2016 remaster, from the original master tapes, by world-renowned rock studio engineer Andy Pearce.
2CD deluxe versions feature the earlier 24BIT/96 KHZ remastered versions of the original albums plus bonus tracks. CD2 of ‘Pictures At An Exhibition’ is the new 2016 remaster. The CD booklets feature extensive notes from new 2016 interviews with band members Keith Emerson and Greg Lake by legendary rock journalist Chris Welch.

In addition, you can also pre-order the brand new 3CD ‘Emerson Lake & Palmer – The Anthology’, a career-spanning collection (1970-1998), showcasing their immense musical talents. This special, 3CD casebound book edition was produced in association with all 3 band members. It contains extensive sleeve notes by Chris Welch and features tracks from all of their original albums. Over 3½ hours of ELP at their very best!

This is the first in a series of exciting Emerson, Lake & Palmer re-issues which will be coming out on BMG over the next few months.

ALL PRICES INCLUDE P&P

All these albums serve as a fitting memorial to Keith Emerson, who died aged 71 on March 10th 2016. When speaking about ELP’s career and achievements for the re-issue project he said: “Emerson, Lake and Palmer are very proud to have brought this great music to a new generation of musicians and fans.”


Full BMG Press Release with details of these first three 2016 re-issues.
EMERSON, LAKE & PALMER: A TREASURE CHEST OF CLASSIC ALBUMS
EXTENSIVE VINYL, CD & DIGITAL REISSUE PROGRAMME THROUGH BMG RELEASED ON 29TH JULY 2016 WITH THE RELEASE OF THE FIRST 3 ALBUMS AND A NEW ANTHOLOGY

Emerson, Lake & Palmer were one of the most successful, innovative and ground breaking British groups of the golden age of Progressive Rock.
As well as creating spectacular ‘live’ shows that incorporated advanced technology and showmanship, they also recorded a cascade of powerful albums that sold in millions around the world. During 2016 and 2017 the band’s musical legacy will be celebrated by BMG with an important and comprehensive re-issue programme that will put the spotlight on ELP’s nine studio albums as well as their ‘live’ recordings and compilations.
The trio’s remarkable style, combining original compositions with rock, jazz, folk and classical influences, was performed with passion and integrity by the founder members:
Keyboard maestro – the late, great Keith Emerson
Singer, guitarist, bass player and producer – Greg Lake
Drummer and percussionist – Carl Palmer

Their phenomenal mix of melodic songs, dynamic arrangements, brilliant musicianship and electrifying sound broadened the audience for progressive rock and guaranteed ELP massive international appeal, as they headlined stadium tours throughout the 1970s and 1990s and achieved sales of over 40 million albums.

ELP also enjoyed a major hit single with ‘Fanfare For The Common Man’, and their 21 minute epic track ‘Tarkus’ is hailed as a milestone in Prog Rock history.

New and old generations of fans will now be able to enjoy ELP’s music afresh, as their albums are released in a range of different formats, from CD and freshly cut vinyl LP to digital download, high definition digital and mastered for iTunes. Vinyl connoisseurs will be pleased that following a special request from Greg Lake, the LPs will be presented on 140 gsm vinyl to ensure a superior high quality sound. The LP inner bag features an explanation of the reason behind this by Greg.

THE ALBUMS
The group’s first three albums are scheduled for re-release on 29th July 2016. All the CD version booklets will feature authorative liner notes and interviews conducted in 2016 with Keith Emerson and Greg Lake, by legendary rock journalist Chris Welch.
The band’s debut album ‘Emerson, Lake & Palmer’ (1970) will be available as a 2 CD set with CD 1 comprising the original album in its 2012 remastered edition. CD 2 offers an Alternate Album in a 2012 Steven Wilson stereo mix, with bonus tracks. The LP version will be the original album, newly cut for the first time from 24 Bit/HD 2012 remasters.

The Standard Digital Download will comprise the remastered 1970 album and an Alternate Album (2012 Stereo remix) with bonus tracks. The same contents will be available on MFiT and HD digital formats, all taken from the 2012 remasters.
‘Emerson, Lake & Palmer’ was first released after the group’s critically acclaimed debut show at the 1970 Isle of Wight Festival, when they performed to 600,000 people. Its dynamic original compositions and classical adaptations are brimful of Keith Emerson’s superb piano and Moog synthesizer work, Greg Lake’s magnificent vocals, bass and acoustic guitar playing and Carl Palmer’s lightning fast drumming.

Bartok’s ‘The Barbarian,’ together with originals ‘Take A Pebble,’ ‘Knife Edge,’ and the three part suite ‘The Three Fates’ are followed by ‘Tank’ and Greg Lake’s ballad ‘Lucky Man’ which was the band’s debut single. The Alternate album has 12 tracks peppered with bonus items notable an informal ‘Rave Up,’ a Carl Palmer ‘Drum Solo,’ and alternate versions of ‘Take A Pebble,’ ‘Knife Edge’ and ‘Lucky Man.’

The band’s second album ‘Tarkus’ (1971) saw ELP take a new direction with yet more complex keyboard sounds. The title track took up the whole of side one of the original LP, and defined the band’s exultant, bombastic approach. ‘Jeremy Bender’ ‘Bitches Crystal,’ The Only Way (Hymn)’, ‘Infinite Space (Conclusion)’, ‘A Time And A Place,’ and the rocking ‘Are You Ready Eddy?’ complete this Number One U.K. album that also shot to Number 9 in the U.S. charts.

ELP’S third album ‘Pictures At An Exhibition’ (1971) has been credited with inspiring many young musicians to embrace and study classical music. Based on the group’s enthusiastic interpretation of the famous work by Russian composer Modest Mussorgsky, it was a major hit and reached Number 3 in the U.K. and Number 10 in the U.S. album charts. ‘Pictures’ was recorded on March 21st, 1971 at Newcastle City Hall, where Emerson made use of the hall’s thunderous pipe organ.
The LP and disc 1 of the CD comprises an excellent new remaster of the ‘Pictures’ album from the original master tapes.
On the 2 CD set, tracks on CD 1 include ‘Promenade,’ ‘The Gnome,’ ‘Promenade,’ ‘The Sage,’ ‘The Old Castle, ‘ ‘Blues Variations,’ another reprise of ‘Promenade’, ‘The Hut of Baba Yaga, ‘ The Curse of Baba Yaga,’ ‘The Hut of Baba Yaga,’ ‘The Great Gates of Kiev’ and encore number ‘Nut Rocker’ a hit by B.Bumble & The Stingers. Bonus tracks are a medley of ‘Pictures’ recorded ‘live’ at the Mar Y Sol Festival, Puerto Rico, on December 4th, 1972.

Disc 2 has another live performance of the extended work, recorded at the Lyceum Ballroom, London, on December 9th, 1970, complemented by live performances of ELP favourites ‘The Barbarian,’ ‘Knife Edge,’ ‘Rondo’ and ‘Nut Rocker.’
Accompanying these three albums is a special 3 CD and Download release ‘Emerson, Lake & Palmer – The Anthology.’ This superb, career-spanning set has 39 tracks from the years 1970 to 1998, the choice of material approved by all three band members. It is presented in special ‘casebound’ book packaging with detailed, informative sleeve notes by Chris Welch, illustrated with rare band photographs.

The songs are selected from the albums ‘Emerson, Lake & Palmer,’ ‘Tarkus’, ‘Pictures At An Exhibition,’ ‘Trilogy’, ‘Brain Salad Surgery,’ ‘Welcome Back My Friends To the Show That Never Ends,’ ‘Works Volume 1,’ ‘Works Volume 2,’ ‘Works Live’, ‘Love Beach,’ ‘Live At Nassau Coliseum ‘ 78’. ‘Black Moon’. ‘In The Hot Seat,’ ‘Live At The Royal Albert Hall 1993’ and ‘Then & Now.’
Among the highlights are the band’s performance of Copland’s ‘Hoedown’, and their version of ‘Jerusalem’ by William Blake and Hubert Parry. CD 3 includes the stirring ‘Fanfare For The Common Man,’ Keith Emerson’s hit rendition of the famed ‘Honky Tonk Train Blues,’ Greg Lake’s 1975 solo hit ‘I Believe In Father Christmas’ and the group’s menacing interpretation of the TV theme ‘Peter Gunn.’ ‘Tiger In A Spotlight’ is another live track, recorded at the group’s comeback show at the Royal Albert Hall.
Subsequent batches of important original ELP albums will be released by BMG later in 2016. They are ‘Trilogy,’ (1972), ‘Brain Salad Surgery’ (1973) and the unique triple live album ‘Welcome Back My Friends To The Show That Never Ends’ (1974).

FOOTNOTE:
All these albums now serve as a fitting memorial to Keith Emerson, who died aged 71 on March 10th 2016. When speaking about ELP’s career and achievements for the re-issue project he said: “Emerson, Lake and Palmer are very proud to have brought this great music to a new generation of musicians and fans.
Pre-order here http://www.pledgemusic.com/projects/elpreissues
ELP