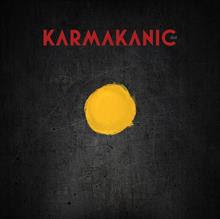 KARMAKANIC http://www.insideoutmusic.com/release.aspx?IdRelease=1940
DOT
22/07/2016
Special Edition CD+DVD Digipak, CD+DVD Jewelcase, black LP+CD, Digital album
Karmakanic kicked off their career in 2002, and now, 14 years, four studio albums and two live albums later, they are back with their fifth full-length album, DOT.
The band’s founder, bassist Jonas Reingold says: “I got my inspiration to start writing DOT when I stumbled upon a text by the famous American author and astronomer Carl Sagan. He was talking about how small and insignificant we are in this vast universe.
Of course that can sound like a cliché and a lot of things have been said about our existence, universe, why are we here, where are we going, when will it end, when did it start, whats the purpose of it all? And so on. But he put it really elegantly in this rather short text, so I never looked at it as a cliché. The inspiration for him was actually a picture of the earth that Voyager 1 took 1990 from the outer areas of our solar system. The earth appeared in the picture as a small pixel, like a pale blue dot suspended in a sunbeam.”
“Look again at that dot. That's here. That's home. That's us. On it everyone you love, everyone you know, everyone you ever heard of, every human being who ever was, lived out their lives. The aggregate of our joy and suffering, thousands of confident religions, ideologies, and economic doctrines, every hunter and forager, every hero and coward, every creator and destroyer of civilization, every king and peasant, every young couple in love, every mother and father, hopeful child, inventor and explorer, every teacher of morals, every corrupt politician, every ‘superstar,’ every ‘supreme leader,’ every saint and sinner in the history of our species lived there--on a mote of dust suspended in a sunbeam.” – Carl Sagan

“It´s fascinating to think that this little dot is all we are and all we´ll ever be,” says Reingold. “It gives us perspective. And I think perspective is a great tool for making good choices. Honestly, is it worth fighting over country borders, go to war, choose hate instead of love when you look at life from this perspective? So I decided to write a song about it: ‘God - the universe and everything else no one really cares about’.”
This song, presented in two parts, forms the centerpiece of DOT and clocks in just shy of 30 minutes’ total playing time. Other songs are the short rocker “Steer by the Stars,” co-written with Jonas’s old buddy and colleague from The Tangent, Andy Tillison. Andy also contributes with some roaring Hammond organ on the aforementioned 30-minute epic.
Also featured on the album is “Higher Ground,” a “mini epic” where Jonas writes about his upbringing and the good and bad off growing up in a small Swedish town; and “Traveling Minds,” a majestic symphonic piece that brings us back to the vibe of the Yes classic “And You and I.”

Karmakanic 2016 includes prominent members such as Morgan Ågren, a Grammy-winning musician on both sides of the Atlantic and known from his work with Frank Zappa, Kaipa, Steve Vai, Tony Iommy, Terry Bozzio, and was voted No. 1 in Modern Drummer’s Readers Poll in 2010.
Göran Edman worked with Swedish stringbender Yngwie Malmsteen between 1990-1992, touring the world and recorded the album Fire and Ice and Eclipse.
Lalle Larsson is a leading star on the Progressive Rock scene, having recorded with artists such as Agents of Mercy, Jon Anderson, Gary Willis, and Randy Brecker. He has also released three albums with his own Lalle Larsson´s Weaveworld.

Binding together this fine cast of performers is the artwork of the legendary Hugh Syme, known best for his work on so many of those classic Rush album layouts. With Syme’s unique approach, the current Karmakanic circle is complete.
DOT was mixed and produced by Jonas Reingold, guaranteeing a solid and extremely detailed sonic picture.
As a treat for the fans who pick up the limited edition, there will be over 2 hours and 20 minutes of DVD material, including The Making Of Dot, Karmakanic Live in the US and Interviews with various band members.
Karmakanic