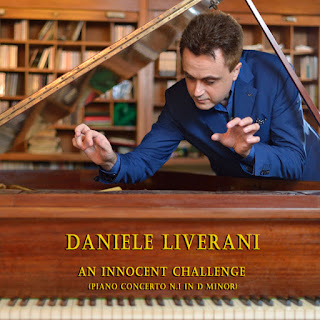 
After the release of a couple of guitar albums (Eleven Mysteries-2012 and Fantasia-2014) , during the last 2 years, Daniele Liverani has focused
in writing and arranging various orchestral compositions.
As a result of this experience, he's going to release one of those compositions in a new album titled "An Innocent Challenge".
It's going to be a 4 movements Piano Concerto in D Minor that he wrote, orchestrated and recorded during the last 2 years.
The release will be worldwide in digital format only, by the label "Lion Music" from Finland and will take place on August 25th 2016.


It's going to be a very different release from his previous heavy prog rock albums, very orchestra and piano oriented, and it represents a sort of come back to
his classical roots where he came from, way before he approached guitar and heavy/prog rock music.