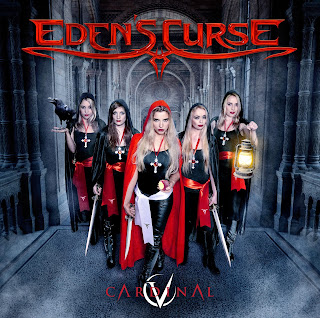 Produced by Paul Logue and Thorsten Koehne, 'Cardinal' contains 12 songs with all of the usual Eden's Curse trademark melodies, hooks and riffs.

Written mainly by the band's long established writing team of bassist and founding member Paul Logue, virtuoso guitarist Thorsten Koehne and former drummer Pete Newdeck (Tainted Nation), what is immediately apparent about 'Cardinal' is that it showcases some of the group's melodic yet heaviest and most progressive moments to date.

"We took two years to write this album, because ‘Symphony Of Sin’ was such a successful album for us. We like to do things properly in this band and explore every possible opportunity to make each moment of every song the very best that it can be. We are not the type of band to just churn out songs with next to no quality control - we scrutinize every riff, lick, hook, melody, lyric and ask - can we do it better? This has been a long, hard and collaborative process that has not only produced some of the best songs we have ever written but some of the best collective performances on any Eden's Curse album to date" enthuses bassist Paul Logue. 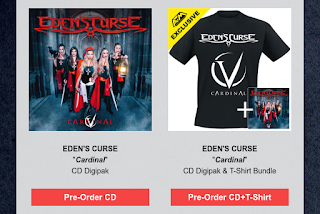 Guitarist Thorsten Koehne added "We are known as Eden's Curse for writing some good hooks, so we can always come up with that, but one thing we wanted to do on this album was bring out the technical side of the band a little more as well as make it heavier".

Opener 'Prophets Of Doom' hurtles out of the speakers with its double bass attack and strong riffing, wrapped around some huge vocal hooks and multi-layered keyboards - it's a signal of intent!

Followed hot on its heels is lead single 'Sell Your Soul' - an uplifting, upbeat and extremely catchy song featuring some wonderful guitar/synth interplay between Koehne and Chrism again topped off by the fabulous voice of Nikola Mijic.

The sensational near 7 minute epic progressive ballad 'Find My Way' is, simply put, one of the finest songs Eden's Curse has ever written. With it's sonic layers and huge dynamic landscapes, it’s candy for the ears on this passionate and epic track - that simply has everything! From Mijic's heartfelt vocals, Chrism's subtle piano and overblown keyboards, Logue and Clelland's thunderous rhythms,Koehne's razor sharp guitars, a wall of orchestral strings to its anthemic soar-away chorus - this song is a real tour de force!

'Unconditional' is a stunning radio friendly track featuring a duet between Mijic and former Leaves' Eyes vocalist Liv Kristine. "It's not a ballad, per se, as it rocks out in places, but it's a song very much in the same vein as 'Unbreakable', with its pop sensibilities, style and melodies. It could arguably be the most commercial sounding track we've ever written! The contrast between Liv and Nikola's voices works so well and adds a real personal touch to what is essentially a love song" declares Logue.

Liv Kristine comments "It was such a pleasure and honor working with Eden's Curse. I love this track - it's like the freshness of a sunny, really early Saturday morning. It's powerful, highly interesting and passionate. Nikola's voice is outstanding and gripping - a superb duet partner! I hope we get the chance to perform 'Unconditional' live some day".

Closing 'Cardinal' is the album’s second epic track, the near 8 minute 'Jericho', based on the biblical tale of the Battle of Jericho. A real story both lyrically and musically, it is quintessential Eden's Curseand surely destined to become a live fan favourite. "It has everything including the kitchen sink in it! I really wanted to write a long epic tune that has lots of dynamics, musically and lyrically, and could take the listener on a journey into the heartlands of the desert. This song was really great fun to write, together with Thorsten, especially the long instrumental section in the middle. I think this will be great fun to play live! It sounds like our songs 'No Holy Man' and 'Jerusalem Sleeps' marry, have a baby and name him 'Jericho'" remarks Logue.

"Each Eden's Curse album has its own unique identity and 'Cardinal' is no different. Besides the old guard of Thorsten and I, the newer guys like John and Chrism have added so much to the sound. John's accurate and tasteful drumming is a real highlight on the record and Chrism could very well be the best keyboard player we have ever had. Great sounds, ideas and the interplay with Thorsten is at times breathtaking! Nikola continues to go from strength to strength as the band’s singer and proves to be a real find for us vocally and as a person. Plus the bass and the songs aren’t so bad either" laughsLogue. "The record has some absolute classics that will waltz into our live set with consummate ease. We are extremely proud of what is our biggest production to date. We love it and know our fans will too" he further adds. 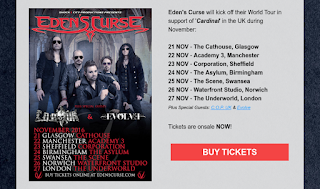