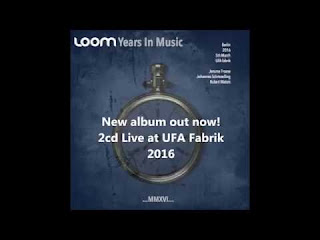 Loom will release a new double Live album on the 22th July! Shipping starts today (20th July). The album was recorded at Loom`s concert at Ufa Fabrik, Berlin on the 5th March 2016. The album is called Years In Music, and is released by Viktoriapark Records. The public noises you can hear on this track is of course not on the new album! The sound quality will be much better too.
Order from: http://www.johannesschmoelling.de/

Loom will also perform at the E-Live festival in Oirschot, near Eindhoven, Holland on the 29th October at Theatre De Enck.