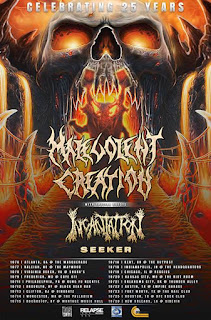 Texas tech-metallers SEEKER has announced US tour dates supporting Malevolent Creation and Incantation this October. The band has toured relentlessly alongside Shai Hulud, Arsonists Get All The Girls, Death Before Dishonor and others. "We're unbelievably excited to head out with these two legendary bands,” states SEEKER vocalist Bryce Lucien. “We're hitting a lot of our favorite cities and can't wait to play music from our new album on this tour."

The band is currently in the studio with Zach Ohren (Chelsea Grin, Fallujah) recording the follow up to 2013’s Unloved, which was heralded be Decibel Magazine as ‘f*cking lethal.’ "We've been in the studio for about a week and everything is turning out great. The drums sound huge and the guitars are coming in flawless and absolutely crushing. We've spent nearly three years working on this album and can't wait for everyone to hear it. Expect the darkest, fastest, and most chaotic music that we've ever written," promises Lucien.