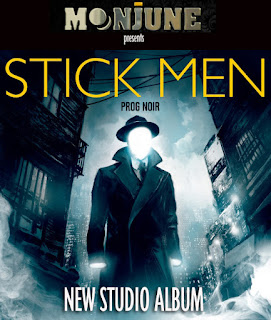 Much to the excitement of music aficionados worldwide, prog legends Stick Men will be releasing their new album “Prog Noir” on October 21, 2016, which is now available for pre-order as a single disc edition and a super deluxe box set, which contains an additional bonus CD with exclusive material, a double vinyl version of the album, a t-shirt and poster. The band, featuring members of King Crimson Tony Levin and Pat Mastelotto, have also released a new lyric video for 'The Tempest'! A departure from their previous efforts, “Prog Noir” also includes 'song' oriented material featuring vocals on several tracks. 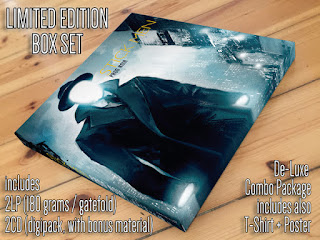 The long awaited new album of STICK MEN "Prog Noir" is finally is available in 3 formats:

SIGNED LIMITED EDITION COMBO PACKAGE DELUXE BOX SET (2LP/2CD/POSTER) + T-SHIRT
The combo package includes:
• 2LP 180 grams gatefold (the LP has a, 11 minute bonus tracks on the Side B of the second LP, which is not included in the regular CD package)
• 2CD special edition of the new album, Digipack. (Disk One is the regular 10 track album. Disk Two contains 8 bonus tracks.)
• Full color poster of the album artwork (17x22 inches)
• Full color T-Shirt (front only). Available in Navy Blue and Black.
ALL BOX SETS WILL BE SIGNED BY ALL 3 BAND MEMBERS (Tony, Pat & Markus).
All orders will be shipped in the late October.
Pre-orders are $140 USD / 120 EUR plus shipping.
Those who contribute $200 USD / 180 EUR or more, will have their names included in credits inside of the box set.
This special box set includes digital pre-order of “Prog Noir”. Fans will get 4 tracks now (streaming via the free Bandcamp app and also available as a high-quality download in MP3, FLAC and more), plus the complete album the moment it's released. 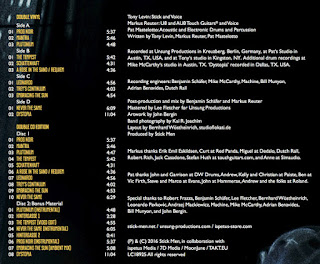 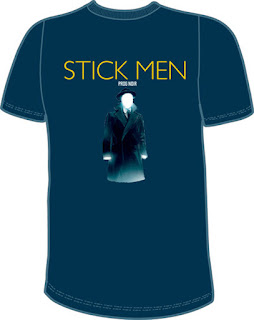 
With riveting performances by the modern prog-rock legends Stick Men – Tony Levin, Markus Reuter and Pat Mastelotto – , "Prog Noir" is ambitious, achieving and immediately essential. Cinematic themes, towering grooves and intricate arrangements are all on tap, and shower down in abundance. Proving conclusively that the whole is indeed greater than the sum of its parts, this herculean effort exceeds any perceived limitations of the trio format -- satisfying even the most devout and demanding of listeners.

Long-time fans of Stick Men and King Crimson will revel in ecstasy, as the three sonic adventurers gleefully waltz to the outer fringes, while remaining sure-footed through every scene. The chemistry of Levin and Mastelotto has never been more evident, keeping a solid, propulsive undercurrent flowing beneath the soaring presence of the ingenious 'mad scientist' antics of Reuter. ... and a profound presence Markus Reuter does prove himself to be. One could be quickly forgiven for mistaking his avid, searching, convicted playing for that of Master Fripp, if administered under blindfold!

The album's ten compositions showcase Stick Men at their most versatile and enterprising; there's even some superb vocals (and vocal arrangements). While most of the large following the band has amassed will undoubtedly be surprised by the more structured and preconceived nature of the tunes, the revelation is a pleasant one. The album triumphantly succeeds on every level, with the group even displaying a playful sense of humor, clearly enjoying and savoring the moment.

From the overpowering to the sublime; from an organic, instinctive avant garde, to intricate, Crimsonesque tapestries, to rich cinematic themes and potent melodies, the album embodies the go-for-it, pioneering spirit that fans of the genre have long savored. A modern prog epic!