The Vision Ablaze: have premiered a new video single for the song “Absent” 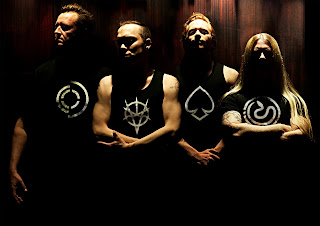 Danish progressive metal quartet The Vision Ablaze have premiered a new video single for the song “Absent,” which opens their most recent album Youtopia.

The album was released in September last year via Mighty Music, and was produced by Jacob Hansen (Aborted, Mercenary, Volbeat, Pretty Maids).

About the story behind the track and how it complements the rest of the material on Youtopia, the band commented: “‘Absent’ is the first song on our album and it embodies many of the themes on the album; seeking truth, shattering illusions, questioning authorities and waking up. ‘Absent’ is the story of someone who must transcend the human illusion and save himself and humanity from the restraint of lies and deceit.”

For the rest of the year The Vision Ablaze has planned tours in Demark, Sweden and Germany. Talking more about their plans, they said: “We've recently switched to wireless in-ears and it's the first step in making a smother live show. It enables us to control many important variables in our setup. We're also planning a video for 'Monster' too - which will be the 6th video for the album.”

Youtopia won “Best Production” at the High Voltage Rock Awards 2016 in Copenhagen. It's the most prestigious award show for rock and metal in Denmark. The award cited producer Jacob Hansen's outstanding work — making a dynamic album that's both really crushing and very soft and clean at the same time. The award was given by renowned producer Flemming Rasmussen and he praised the album for the pristine production.

The Vision Ablaze also had the honor of playing at the show that featured Denner/Sherman as the headliner.

Watch other videos from Youtopia on the following links:

Under the Killing Moon:
https://www.youtube.com/watch?v=rFPpj3ITtAk

About The Vision Ablaze:
The Vision Ablaze is a Danish act formed in 2010. The music is an effective force of aggression, melodic passages and that hinted-at tech. The vocals carry great nerve and emotion and ranges from blow-torch screams to mellow and strikingly well sung cleans. To back the voice the guitars are crushing and progressive without ever loosing the foothold on great song structure. The backbone of The Vision Ablaze, the bass and drums, comply with all the above - while the drums maintain an original feel all the way through, touching upon semi-jazzy elements and off-beat rhythms and blast beats.