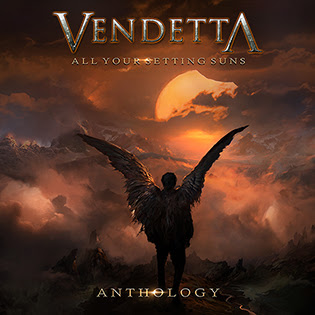 UK’s Legendary Classic Hard Rockers VENDETTA releases a double dose album including their best tracks in new updated versions, some of them with new vocals, some with even fatter guitars and an album’s worth of previously unheard live tracks.

Hailing from Newcastle Upon Tyne in the industrial north east of England, Vendetta was formed in late 2005. Guitarist Edward Box had already released two solo albums (“Plectrumhead” and “Moonfudge”) but had grown tired of the genre and so wanted to try out some vocal inspired material he had written. Calling on his old friends, guitarist Pete Thompson and bass player Gary Foalle, the initial plan was to just try out Ed’s songs and see how they sounded in a fully amped environment. After just one practice one thing became clear; to do the songs justice, forming a fully armed and operational band was the only option. These musicians had for too long forsaken the music they loved and it was time to get back to basics and create their own brand of traditional metal. Drummer Mick Robson was seconded from fellow rockers 300 ft Gorilla to help out and the job of learning Box’s compositions began in earnest. By summer 2006 the band was ready to record and twelve tracks were completed over a hot August. Ed’s first port of call was Lion Music, with whom he had released his two solo albums, and a deal was swiftly hooked up. “Tyranny of Minority” hit the racks in September 2007 and it was indisputably apparent that the band knew their genre inside out. From the anthemic “Generation Kill” to the bone crushing “I Executioner”, the album was a carefully crafted calling card that received a series of first rate reviews.
Vendetta