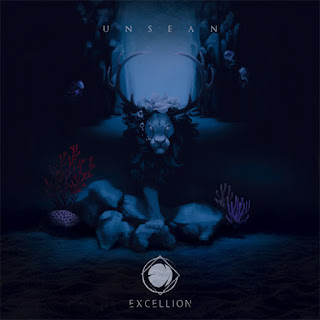 Mexican metal quartet, Excellion, stream their new, fourth EP titled Unsean ahead of its release which is set for August 6th..

Speaking about the level of creativity the new EP reaches compared with the previous efforts, bassist and backing vocalist Adrian Vilbel commented: “On ‘Unsean' you can find this maturity in the sound that is very unique actually, all instruments converge in a way that it just was’t in our previous releases, that’s why this new material it’s really a breakthrough for us.

“We were trying to express ourselves in the way we felt at the moment when we moved to Mexico City, it was a moment to adapt and learn a new way to live, so we felt the urgency to write some riffs and melodies that made people feel those expressions, that’s how the whole concept came to mind,” he continues.

Unsean is the fourth EP release the band put out to date, and it was originally planned to be a full-length release, but Excellion decided to split it in two shorter releases. Vilbel also talked about the reasons behind that decision.

“Nowadays it’s kind of hard that a person listen to a full album from the beginning to the end. There would be a lot to digest and they just don’t want that, at least a lot of people, so yeah, ‘Unsean’ was actually a full-length, but we wanted people to give the same weight to every song and not just one or two. We wanted to write songs with high quality too and not just fillers so we decided to make this release in two parts. This is part one and you can expect part two some time around 2017. This way people can sit and listen the whole EP and it’ll be easy to digest too.”

Unsean is out on August 6. Listen to the EP in its entirety through a YouTube stream. The EP is available from iTunes and Google Play.