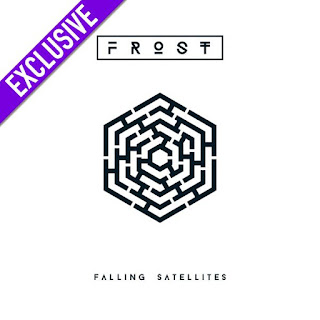 After an 8 year silence, 2016 finally sees the release of the long awaited 3rd album by neo progressive rockers FROST*, “Falling Satellites”. The brainchild of keyboard player Jem Godfrey, FROST* released their first album, “Milliontown” to critical acclaim in 2006. Then as now, Godfrey is joined by long term collaborator John Mitchell (Lonely Robot/It Bites) on guitar and vocals plus Nathan King (Level 42) on bass and drummer Craig Blundell (Steven Wilson). “This line-up has been in existence since 2010 and is now the longest version of FROST* that there’s ever been”, says Godfrey, “so it’s strange to think that this is the first time we’ve recorded an album together”. “Falling Satellites” is still unmistakably a continuation of the FROST* sound, but with new instruments and textures added, such as The Chapman Railboard which Godfrey has learned to play recently. “The Railboard is a descendant of the iconic Chapman Stick”, Godfrey explains, “but it’s made of aluminium rather than wood so it has a very glassy, tubular sound which is quite unique. Not only that, but I had a custom tuning set in 5ths and octaves designed in collaboration with Emmett Chapman, he thought I was mad, but it makes sense to me as a keyboard player. Most people play it like a guitar and tap it, but I play it horizontally like a keyboard and attack it with e-bows and mallets and stuff, it’s brought a whole new sound to some of the songs like “Numbers” and “Closer To The Sun””. “Falling Satellites” offers an incredible wide sonic palette ranging from the electronic pop of “Lights Out” over 80’s arena rock (“Signs”), the grooving yet symphonic “Heartstrings” to the almost 8 minute long “The Raging Against The Dying Of The Light Blues In 7/8”. On “Falling Satellites” FROST* have mastered the art of fluently melting the complex and the catchy into a rousing, captivating sound. 180 gram vinyl incl. 2 bonus tracks on the LP and CD!