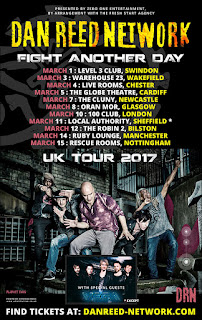 “FIGHT ANOTHER DAY” - MARCH 2017 UK TOUR
Dan Reed Network are pleased to announce a nationwide 11-date UK Tour in March 2017 to promote their recent studio album “Fight Another Day”.
Tickets are now on sale via - http://danreed-network.com/tour/. Special guests on all dates (except Sheffield) is VEGA.

DRN is thrilled to be returning to Europe this next March, says Reed. “Dan Pred, Brion James, Melvin Brannon II, Rob Daiker and I are really looking forward to playing many new and unique venues throughout the UK, and rockin' up the funk hard core and meeting all those who are able to attend and bring down the house with us. We thank you for the many years of support and especially believing that we had new music in us to offer! We are forever grateful for you all being there with us on this journey!”

Frontiers Music Srl released Dan Reed Network’s latest studio album “Fight Another Day” on Friday June 3rd, 2016. The album marked a significant and anticipated return of one of the most infectious and gifted bands to come out in the melodic rock world in the second part of the 1980’s.

Originally formed in Portland, Oregon, Dan Reed Network packed out local clubs from late 1984 through 1986 with their compelling mix of musical styles ranging from hard rock, funk and soul. In 1987, the first single, “Ritual”, peaked at number 38 on the Billboard Charts and became a staple of the funk rock.

While attending the Rock and Roll Hall of Fame and Museum induction ceremony in NYC in January 1989, Dan Reed met up with producer Nile Rodgers (Duran Duran, Madonna, David Bowie) which led to the creation of the second album “Slam”. Produced by Rodgers, it better represented the Dan Reed Network’s live sound and accelerated the band’s growing status in Europe. Dan Reed Network opened the European leg of Bon Jovi’s ‘New Jersey Tour’ in 1989 and The Rolling Stones’ European Urban Jungle Tour in 1990.

DRN’s third album “The Heat”, produced by Bruce Fairbairn in 1991, was their biggest success in the UK, mostly due to the single“Lover” which was accompanied by a live video from Wembley Stadium filmed when they opened for the Stones.