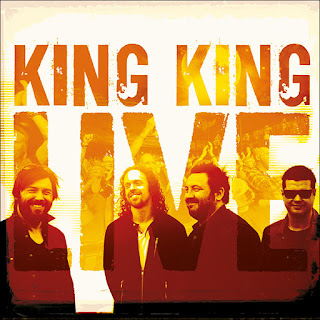 A Deluxe Edition 3-disc set, available now to pre-order at Amazon.co.uk, includes two CDs that captures the live energy of King King's sold-out hometown concert at O2 ABC in Glasgow on 14th May 2016, plus a bonus DVD film of the band performing to a sold-out crowd at the Holmfirth Picturedrome on 13th April 2016. Says King King's lead singer and guitarist, Alan Nimmo, "We are excited about 'King King Live' because it's the first time we've ever released a live album. It's a great testament to how our audiences drive us on to perform to the best of our abilities. The audience reaction to the live performances is amazing. This release couldn't have been possible without them."

King King recently won five awards at the 2016 British Blues Awards including Best Album ("Reaching For The Light"), Best Vocalist(Alan Nimmo), Best Bass Player (Lindsay Coulson), Best Song ("Rush Hour") and Best Songwriter. Having scored three radio hit singles on Planet Rock with the songs "Crazy" and "Hurricane", and "Rush Hour", in 2015 King King received a nomination for Best New Band at the Classic Rock Awards. King King followed up with a UK arena tour supporting Thunder that was highlighted at a London's Wembley Arena, which won them over a raft of new rock fans.