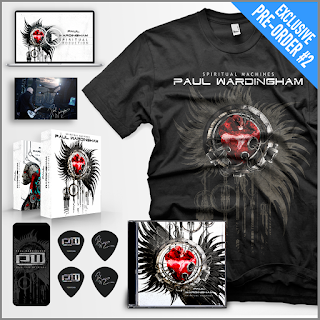 Short video of me recording a solo for SYSTEM ERROR from my new album SPIRITUAL MACHINES - Out Nov 21
PRE-ORDER NOW at http://store.paulwardingham.com
Thanks for your support!

Following on from his critically acclaimed albums Assimilate Regenerate (2011) and The Human Affliction (2015), Spiritual Machines is the new cyberpunk-inspired instrumental guitar album by Paul Wardingham.

Complete with the melodic choruses, mechanical metal riffs and hi-tech futuristic shredding that Paul has become known for, Spiritual Machines is perhaps his most accessible work to date.

“I really wanted to get back to a style that I was doing a few years before writing Assimilate Regenerate. More focused on melody and riffs than on lots of guitar solos. Spiritual Machines is more metal, very song orientated and has a kind of raw industrial quality to it”

Spiritual Machines: Track Listing:
1. The Awakening
2. Spiritual Machines
3. My Sanctuary
4. Break The System
5. Ghosts Of A Concrete World
6. Prophecy
7. System Error
8. Prisoners Of The Future
9. The Edge Of Human
10. Off-World

It’s been called “the best instrumental guitar album in years” by Christian Muenzner (Necrophagist and Obscura) and “the best guitar discovery of 2011” by Andy James, along with praise from guitar legends Dino Cazares (Fear Factory) and Jeff Loomis (Nevermore, Conquering Dystopia).

“The Human Affliction is a continuation of the themes that inspired Assimilate Regenerate: The future, technology and it's effect on humanity. More than that, it's a soundtrack to a dystopian future. Set in a high-tech low-life world, where humanity is blissfully unaware of the dangers of technological progress and the rise of artificial intelligence.....until it's too late. The Human Affliction is my vision of this cyberpunk inspired landscape landscape and post- apocalyptic digital age where the listener can escape reality, amongst cyber metal grooves, cold atmospheric synths, futuristic electronica, emotional melodies and of course...hi-tech shred guitar solos!”