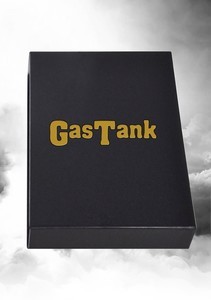 Gastank was an English television show that aired between 1982–1983 on Channel 4. Hosted by Rick Wakeman and Tony Ashton the show featured a mix of interviews with 1970s musicians and impromptu performances where the guest artist would join Rick and his house band in playing re-arranged versions of their classic songs, or entirely new pieces created for the show. The format was very informal with the setting likened to a bar where Wakeman would interview the guest over a drink or two followed by their performance in front of a small studio audience sitting in groups at tables. Wakeman would frequently cite the show as an opportunity for musicians from different bands to get the opportunity to work together. During its run, the show featured guests as diverse as:- Rick Parfitt, Ian Paice, Steve Hackett, Maggie Bell, Roy Wood, Andy Fairweather Low, John Entwistle, Godley and Creme, Suzy Quatro, Donovan, The Strawbs, Eric Burdon, Chris Farlowe, Frankie Millar, Phil Lynott, Alvin Lee, and many others. Now for the first time on DVD all the episodes of Gastank along with a CD of these now seminal music performances of Rick and his guests.

“For many years, many of you have been asking us to release this material from the show I presented with Tony Ashton back in the early 80’s. Gastank was an opportunity for iconic musicians from different bands to get the opportunity to perform live together.
I can now happily announce that much of Gastank is now available . I hope it brings back memories and for those not around when the programmes went out , enjoy some unique performances.”
Rick Wakeman

There will only be 750 of the Special Limited Edition Boxset.