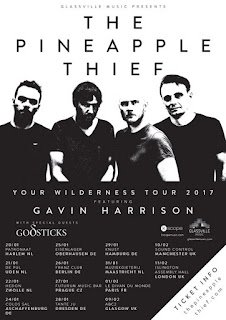 The Pineapple Thief have announced a string of European dates for early 2017, which sees them visiting Germany, The Netherlands, the Czech Republic, France, and the UK. The band have confirmed they will be joined by none other than Gavin Harrison on drums. Their new album Your Wilderness will be performed in its entirety as well as a number of re-imagined TPT classic songs.
Special guests GODSTICKS will be providing support.

The Pineapple Thief - In Exile (from Your Wilderness)