Eden's Curse: are today celebrating the release of their fifth studio album 'Cardinal' 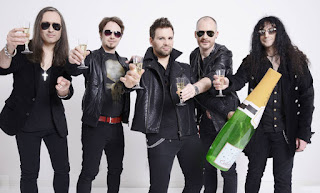