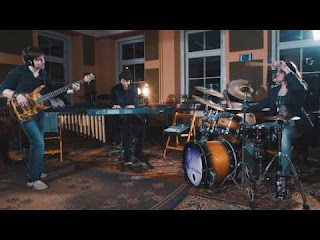 Three extraordinary Slovenian musicians - Marko Volk on keyboards, Janez Zakošek on bass and Grega Gorenšek on drums, always wanted to be in a band that would allow them to truly express themselves and challenge each other with new and exciting musical ideas without compromise.

Their musical paths have crossed years ago and at that time the guys felt they had a special musical connection that was worth pursuing further. In 2015 they reconnected despite Janez living in Switzerland and the other members scattered across Slovenia. Enter Philammon. A blend of heavy fusion, metal, rock and jazz. Their music sounds more progressive than classic rock and metal due to odd time signatures, complex rhythms and jazz harmonies. This unique blend of genres is just what highly knowledgeable and versatile musicians need to thrive and freely express themselves. While most Philammon songs started as Marko Volk's home studio projects, each member contributed to the arrangements which had a big influence on the overall sound. After a year of analytical work on arrangements and fleshing out ideas, their first single and video "Fusion" is born. The song features a special guest, talented Mladen Kalinić on guitar and the video was directed by Bit Sever.

The song was produced by established fusion artist Alex Argento, who worked with big names like Virgil Donati and Marco Sfogli (James Labrie). Watch out - this is just the beginning.