Tilted Axes: to appear as a Featured Musical Act in the 2016 NYC Village Halloween Parade 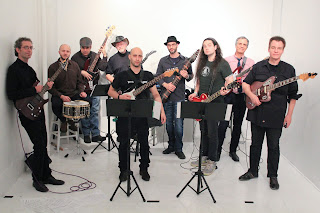 Hot on the heels of their new album release, Tilted Axes: Music for Mobile Electric Guitars, the group will appear as a featured musical act in the 2016 NYC Village Halloween Parade now in its 43rd incarnation. The Village Halloween Parade (VHP) is the largest event of its kind in the nation with an annual estimated audience of 250,000. The event will be televised in the New York Tri- State Area. The parade takes place in New York City’s Greenwich Village on Halloween, October 31st from 7-10 PM. http://www.halloween-nyc.com/

It has been called "New York's Carnival." Although the parade is currently not as informal and wild as it was in its earliest years, it is in effect still an alternative festival.

Tilted Axes is a project created by composer and performer Patrick Grant. It combines the energy of rock, the creative discipline of theater, and the experimental spirit of the NYC arts scene. It is both a processional event and an ensemble of mobile electric guitarists using portable amplifiers strapped to their sides as they walk through the city streets. Tilted Axes has evolved into a project with multiple incarnations on three continents - in the streets, in museums, in the theater, and at festivals.

The music itself, with interlocking layers, makes room for many kinds of genres and grooves in the compositions. It’s not so much "guitar music," as it is music that’s *about* guitar music. It allows the musicians - soloists, rhythm players, and percussionists - to shine in the uncommon textural power of incidental polyphony. The ensemble adapts itself to the environment or occasion, and feeds on the energy of a constantly shifting audience.

To find out more about Tilted Axes and to check out their new album, go to:
http://tiltedaxes.com/tiltedaxes.html