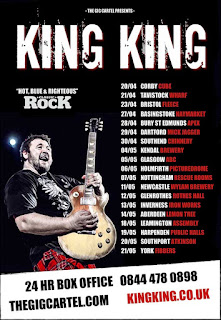 The Gig Cartel in association with Planet Rock present

King King are pleased to announce a raft of new UK tour dates in April and May 2017. The tour kicks off on Thursday 20th April at The Cube in Corby, Northants. All tickets are priced £20, are on sale on Monday 12th December from www.thegigcartel.com and the 24 Hour Box Office: 0844 478 0898.
The tour dovetails the release of a brand new single taken from King King’s upcoming fourth studio album, and follow up to 2015’s multi-award winning Reaching For The Light. The new album is scheduled for release in early September 2017.

Says King King’s frontman, Alan Nimmo, “We’re really excited to perform the new single live. It’s rockier than our previous material, but it still has an inherent King King sound to it. The new single is a nice taster from the upcoming album.”