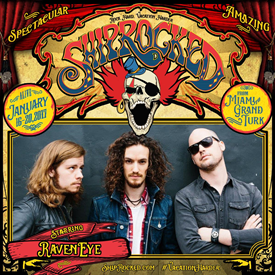 (Los Angeles, CA – December 14, 2016) The 8th annual Shiprocked Cruise just got a little bigger! Announced today, UK’s RAVENEYE have been asked to join the ‘family freak-show and musical marvels’ cruise! Onboard Carnival’s Victory, the fun will start on January 16 – 20, 2017 from Miami’s harbor taking rock revealers on a musical journey to Grand Turk in the Turks & Caicos Islands.

Since forming in 2014, the band has toured globally, supporting bands such as The Darkness, Slash, Deep Purple, Halestorm and Blues Pills. Their incendiary live shows have captivated crowds and put them on the map as a ‘must see live’ band. KERRANG said about their recent O2 Academy, Sold-Out London UK show “’Hate,’ ‘Wanna Feel You’ and ‘Come with Me’ being the kind of rock behemoths that comfortably fill U.S. arenas,” rating the show with 4 K’s to match its 4K-rated debut album, NOVA.

In addition, the band has headlined their own tours through Europe and America and have performed at major international rock festivals such as Download Festival (UK), Hellfest Open Air Festival (France), Azkena Rock Festival ARF (Spain), Rock For People (OFFICIAL) (Czech Republic), Louder Than Life (U.S.), Aftershock Festival (U.S.), and this year’s Maximus Festival in Brazil and Argentina.
Raveneye

Pink Floyd: All of back-catalogue to be made available on Spotify.

Peter Gabriel: Posts about The Life Of Rock With Brian Pern.