Glenn Hughes: says, "I’m thrilled to be touring the UK in January" 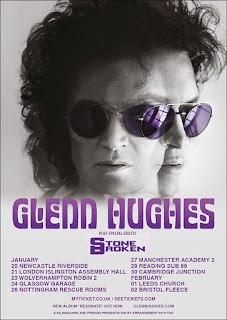 GLENN HUGHES SAYS, “I’M THRILLED TO BE TOURING THE UK IN JANUARY”
UK TOUR STARTS 20 JANUARY AT THE RIVERSIDE, NEWCASTLE

Glenn Hughes, the legendary British rock singer and bassist, who is currently in the studio in LA recording a new studio album with rock supergroup Black Country Communion, has released an official statement to his fans about touring the UK later this month.

“I’m thrilled to be coming over to tour the UK and Europe this month and February,” says Hughes. “My band will now be a four piece. On guitar is Søren Andersen, on drums Pontus Engborg, and on keyboards Jay Boe. Song selections will be a mix from my new album Resonate, and from my well of historic songs through the decades. This tour is all about ROCK and what it means to us all, including my band, and to my fans and friends. Let's get 2017 going with a killer night for ROCK lovers, movers and shakers. I'm in. Let's go! See you down the front!”

Hughes’ special guests are Stone Broken. Tickets can be booked online from myticket.co.uk and www.seetickets.com.

More info about Glenn Hughes and his tour here - http://bit.ly/2cnUhCp