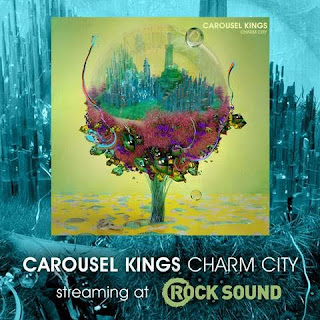 When Rock Sound asked, “Is this the album that could change everything?” the resounding answer is yes! CAROUSEL KINGS are set to change the game with their new release Charm City, streaming in its entirety today at Rock Sound.
Listen to Charm City at Rock Sound.

“We are so excited to finally have our Victory Records debut out there for the world to hear,” exclaims front-man David Alexander. “We would like to dedicate the album to our fans, whose constant words of encouragement are what keep us going. We love each and every one of you, and hope these songs find you well. Connections made via the love of music is something that is priceless.”

In support of Charm City’s release, CAROUSEL KINGS will perform in their hometown of Lancaster, PA on February 11th, followed by the recently announced “The Charm Cities Tour.” With label-mates ABANDONED BY BEARS and special guests BAD CASE OF BIG MOUTH along for the ride, Alexander adds, “We are so thrilled for our full US tour behind Charm City, and it's an absolute honor that the last show is in our hometown at the Launch Music Conference. After that, we look forward to going back to Japan and we also have some really awesome news to announce for the summer!”

Charm City will whisk listeners away into a music wonderland with their toe-tapping pop melodies wedded with the rockier side of punk. Don’t miss your chance to see CAROUSEL KINGS perform live in a city near you.

“The record that could make their name” - ROCK SOUND
“A collection that will give pop tracks a run for their money” - ALTERNATIVE PRESS
“Carousel Kings really is an enigma” - OUTBURN
“An instant force to be reckoned with” - TATTOO.COM
“Every track here is one to love” - NEW NOISE
“Early contender for punk album of the year - HEAVY MAGAZINE
Carousel Kings