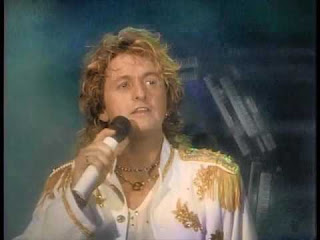 Rock and Roll Hall of Fame announced on December 20, 2016 that Yes would finally be inducted at April 7, 2017 ceremony. It's about time!

Full Frame 4x3 aspect ratio and video enhanced ABWH concert performance of Close To The Edge features Rock Hall fellow Yes inductees Jon Anderson on vocals, Bill Bruford on drums, Rick Wakeman on keyboards and Steve Howe on guitars. Anderson Bruford Wakeman Howe were live at Shoreline Amphitheatre, Mountain View, CA on September 9, 1989. Written by Anderson/Howe, the Yes title track was originally recorded on entire side one of album Close To The Edge in 1972. "Close to the Edge" four parts are: I. "The Solid Time of Change" II. "Total Mass Retain" III. "I Get Up, I Get Down" (08:06) IV. "Seasons of Man" (14:17). Yes, Close To The Edge (1972) is #5 on Rolling Stone 50 Greatest Prog Rock Albums of All Time.