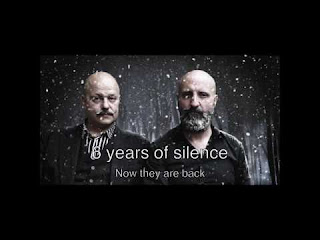 The progressive duo Carptree was formed in 1997 in Stockholm, Sweden, by the songwriters Niclas Flinck, vocals, and Carl Westholm, keyboards and production.

Under the years 2001-2010 they released 5 albums and did some live performances. The Album "Superhero" in 2003 was the first to gain a wide popularity among prog listeners around the world. "Man made machine" in 2005 was release both on their own label FOSFOR Creation and Insideout and got an even wider distribution, then followed by "Insekt" 2007 and "Nymf" in 2010 where the latter also was released as a Vinyl LP in 2011 by Ritual echo records.

The following years Carl was busy recording or touring with Mainly Avatarium but also KRUX, Candlemass and Jupiter Society.

The core of Carptree has always been Carl Westholm and Niclas Flinck which was clearly defined in the beginning as they wanted to keep all artistic decisions in their own hands instead of being dependent on a band or other songwriters.

Nevertheless they've had extremely good help over the years from a loosely connected group of musicians called the "No future orchestra" that also once in a while contributes with good creative input.

Niclas and Carl lives in different parts of Sweden so when they started to work on "Emerger" they wrote most of the songs during Skype meetings once a week so when they met they could focus on the actual recordings. In contrast to this quite modern and digital way of writing music the actual music is played exclusively on analogue instruments and amplifiers except some software Mellotrons. The mix is analogue down to tape and the master done directly from tape. The result is an evolved, more organic and slightly heavier version of Cartree.