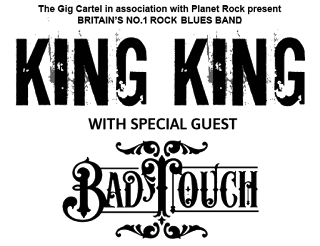 KING KING ANNOUNCE BAD TOUCH AS SPECIAL GUEST ON APRIL/MAY 2017 UK TOUR
King King are delighted to announce that they have added Bad Touch as their special guest for their April and May 2017 UK tour. They are 99% sure their fans will love them and say that “this tour is going to rock!”

King King’s recent UK tour dates were a sell–out. Their recent sell-out concert at The Robin 2 in Wolverhampton was reviewed by the music websites RAMzine and Maximum Volume Music.