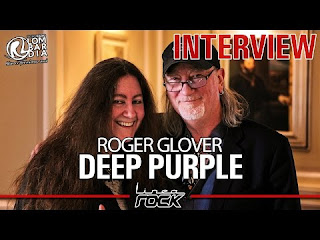 On March 28th 2017 Mr ROGER GLOVER of DEEP PURPLE had a videointerview for breakfast, 10 a.m., in a luxury suite in Milano, with yours truly Barbara Caserta of Linea Rock! Well, when you find yourself in the presence of such Rock Majesty (and realize once again that magnitude of the real great ones is always inversely proportional to their ego!) the emotion is flowing strong and those 20 precious minutes literally fly away! The opportunity (very special thanks to earMusic & Spin-Go) comes from the release of new album “inFinite”, DP’s 20th studio chapter, out April 7th 2017. We go “deep” into the mechanism of coming once again in the studio, the recordings, the docufilm “From Here to inFinite” (which came out from a precise idea and turned out very human and revealing, thanks to Craig Hooper, the filmaker, being a perfect fly on the wall), then the marvellous cover artwork (how it was conceived and you’ll discover if Roger’s talent also as a painter and photographer was any determinat in this concept), the choice of “Roadhouse Blues” (The Doors cover, why that, why now) and about working once again with Bob Ezrin who confirmed himself as one of the most dinamic, direct and intelligent producers in rock. But… is it any more difficult for somebody like Roger to work with another producer since he is a valued producer himself as well? And what about the EP with the leftovers which came out February 3rd: were maybe those songs too good to be ignored but still not fitting the new curse? And about “the eternal Holy Trinity of Hard & Heavy rock” – LED ZEPPELIN, BLACK SABBATH & DEEP PURPLE - is there anything that he has envied to the other two bands thru the years? His concept of heavyness + loudness + attitudeness will blow you away… because humility is what it comes down to, always… About tecnique and being a repented guitarist, Mr Glover has never been a virtuoso but he is certainly a pillar of bass playing… and such a humble one, get it listening to his point of view… Of course I coudn’t resist to make that Rainbow question… but did I get the answer? You check it out!
Enjoy, Comment & Share you rocking Linearockers!
Subscribe for updates:
Linea Rock - Radio Lombardia - 100.3 FM From 8 PM to 10 PM
Live streaming http://www.radiolombardia.it/
Facebook: https://www.facebook.com/linearock
Web Page: http://www.radiolombardia.it/programm...
App: http://www.radiolombardia.it/app/