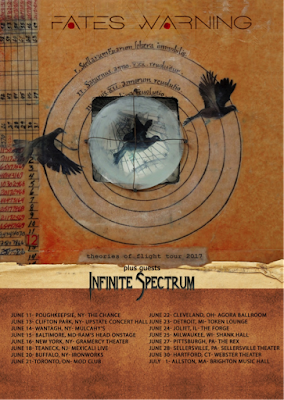 U.S. Progressive Metal pioneers FATES WARNING have announced further shows in European and North America as part of the touring activities for their latest and much acclaimed album "Theories Of Flight".

Due to other commitments, Joey Vera will not be with FATES WARNING on their June 8th Sweden Rock Festival performance. He will be replaced by original FW bassist Joe Dibiase for that show.

Next to the standard CD and Digital Download, "Theories Of Flight" is also available as limited Mediabook 2CD (with 6 acoustic bonus tracks) and as Gatefold 2LP (with full standard album on CD and the 6 acoustic tracks as bonus on Side D!).
All physical are available from the IOM webshop here:
www.insideoutmusicshop.com