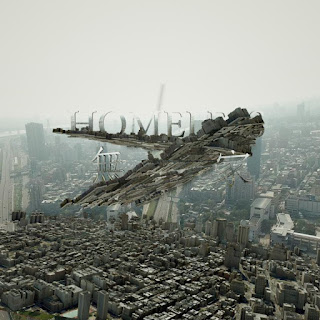 Following the announcement of his new EP Homeless, Beijing-based audio / visual composer Howie Lee is back today to share a new video for the lead single from the project. "四海 Four Seas" is a masterfully crafted CGI visual directed and animated by Howie himself. The video is both beautiful and terrifying, mixing cyberpunk elements with a distorted urban landscape. Homeless is due May 26th via Howie's own Do Hits label, and follows his 2015 full length, Mu Che Shan Chu.

On the inspiration behind the new video Howie explains, "I want to know what people think home is. A lot of time I feel my body is trapped in this urban cube and physically can not go anywhere - I feel the loneliness created by social tension is unhealthy. That's more or less the video trying to express, I think. It's pretty DIY and homemade, we shot all the footage at home."

Later this month Howie will debut his new live show, at the Wetware Douban Music Festival which takes place in Beijing from May 18-21. Watch "四海 Four Seas" and the trailer for Homeless above, read more about Howie Lee and find details on his forthcoming EP below, and stay tuned for more from the Beijing artist soon.

Howie Lee is the sound of future music from cyberpunk Beijing.

Clattering percussion. Skittering rhythms. Found sounds and field recordings. The sound of traditional China, dragged kicking and screaming into the electric age. With his uniquely "Made in China" aesthetic, Howie is a electronic music visionary - creating a hybrid club sound rooted in the Middle Kingdom, but built for our densely interconnected globe.

Howie's debut EP was released via renowned UK tastemaker Trapdoor Records, followed by a 2015 full-length on Alpha Pup. He played the first-ever Boiler Room recording in China (an event that smashed global streaming records), and has supported DJs such as Bok Bok, Plastician, Spooky, Kode 9, Terror Danjah and Daedalus.

And music is just the beginning. As founder and label boss, the Do Hits collective he established in 2011 is now one of Asia's most forward-thinking crews. As curator, he's overseen some of the region's most exciting releases, with a string of successful EPs and LPs from label mates Jason Hou, Yllis and Guzz. As filmmaker, he's produced several stunning abstract CGI works that carry subtle marks of his Chinese identity.

With his latest EP, Homeless, Howie studies what the meaning of "home" means in the world today. Howie's own vocals and live instrumentation taking a bigger role on this release than on previous efforts. Feeling "at home" in the world today is often a lost feeling amidst international immigration crises along with a rise in nationalism. With the ascent of the internet, infinite knowledge is available that comes hand in hand with self-doubt and notion of not belonging in your hometown or even on your home planet. Howie's inspired EP captures the feelings of being lost and forgotten and striving to find a "home."

Howie's visceral, high-energy live shows are constantly evolving, and the latest version is in the works, set to debut in Spring 2017.