RavenEye: Sets sail for July in the USA as Tour Dates announced 2017 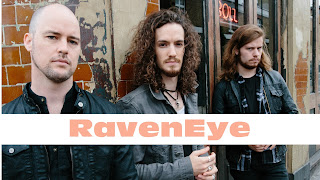 
UK rock trio RavenEye are excited to head back to the U.S. for more tour dates this summer. The band will hit the road on July 6 in Grand Rapids, MI and continue through July 27th in Houston, TX. Three of the shows on their U.S. itinerary will be as special guests of Chevelle.

After touring the U.S. with Slash & Myles Kennedy in 2015 and then again with The Darkness in 2016, RavenEye are excited to head back this July. "We’ve been working on making something epic for this US tour, with the set we’ve been working on we’re putting our blood, sweat & tears into making this the best show we’ve put out there. So prepare for something epic! It’s gonna be heavy."

The band just wrapped up a European tour supporting KISS as well as dates with Hellyeah. Recently they were added to the Download festivals in the UK, Spain and France, as well as Bulgaria’s Plovdiv Festival and the Reading & Leeds Festivals among others. “Hate”, the new single from NOVA, is currently climbing the charts on active rock radio.

Since releasing their wildly successful EP, Breaking Out, and debut album NOVA, RavenEye has toured globally, supporting Slash, Deep Purple, The Darkness​ and Halestorm amongst others. The band has headlined their own tours through Europe and America as well as performing at major international rock festivals such as Download Festival​ (UK), Hellfest Open Air Festival​ (France), Azkena Rock Festival ARF​ (Spain), Rock For People (Czech Republic), Louder Than Life​ (U.S.), Aftershock Festival​ (U.S.), Maximus Festival (Brazil and Argentina) and most recently the Shiprocked Cruise 2017. Their incendiary live shows have captivated crowds and put them on the map as a ‘must see live’ band.

“Blues rock riffs that slither their way into your brain” - Kerrang

“Keep an eye on Raveneye. They are organic, raw and I hear a real ‘70s influence with these guys. When a band like this nails it, you never forget it. Wait for that riff in the middle of the song.” – Nikki Sixx

When RavenEye formed two years ago, the then 25 year old, Oli Brown​, singer and multi-award winning guitarist, had already released four solo albums and toured the world for 10 years with legends such as Jeff Beck​, Buddy Guy​, Johnny Winter​ and Joe Satriani​. Mojo even hailed Oli as “the hottest young pistol in British blues” and Classic Rock Magazine described him as "one of the best and brightest guitar heroes performing in the world today." RavenEye’s live performances take their present and future fans on a journey to the next level.


RavenEye are also performing at the following festivals: